The Cart Shed face of the lime plank is starting to resolve. A central figure  – and the attitude of the block/board – has been influenced by a split in the wood from the base upwards, giving division into what have become legs.

The other supporting heads are equally faceless, hopefully implying community/togetherness but without having to veer further towards the representational – the composition is already  complex with fire, Cart Shed-distinctive tools, a (small) steaming cup and split log.

An interesting comment arose today.  Are the figures gender neutral or do they veer towards the male? And does this matter? 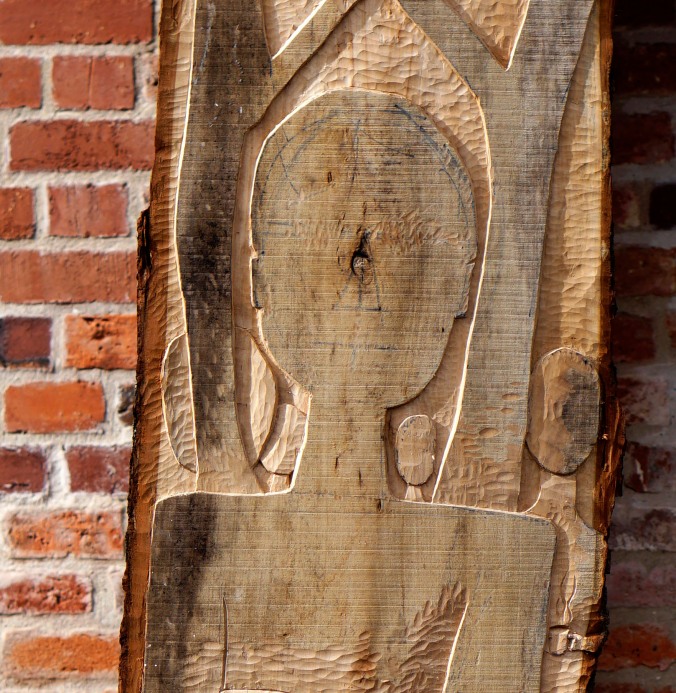 The sculptor is, of course, male, and art is often semi-autobiographical; we draw on what we know in intuitive working. My questions tomorrow morning might be:

Will a softening of the shoulder line weaken the composition in favour of equality?

Are the simple heads and strong necks merely indicative of self-confidence and self-esteem? (something I’ve been conscious to try to achieve through upright stance and posture after an earlier conversation with a former occupational therapist on one of my West Dean teaching days).

Does considering all the above compromise the very imagery that has arisen in the first place?

My first action regardless will be to create a division between the central head and its neck – recessing the neck back into the relief – to follow the idiom applied with other heads.

But what are your thoughts? Art always stimulates discussion and whilst it should never be committee-led, it is an interesting point raised for something which could have value in spreading a message further and wider.